THE BATTLE OF LUNDY’S LANE 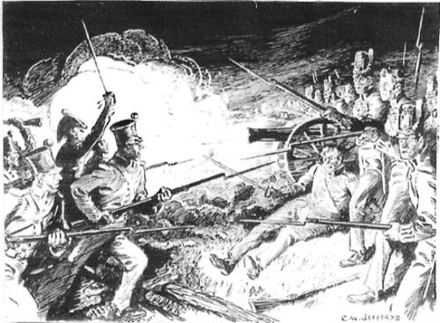 By July 1814, Napoleon had been defeated in Europe and the arrival of seasoned British troops to Canada was imminent.  The American Secretary of War, John Armstrong, was eager to win a decisive victory in Canada before the Duke of  Wellington’s veterans arrived there to reinforce the British Army.

Major General Jacob Brown was ordered to form the Left Division of the U. S. Army of the North and was given two brigades of regulars commanded by Winfield Scott and Eleazar Ripley and Porter’s Brigade of militia volunteers.  On July 3, Brown’s Army captured Fort Erie and then advanced on a portage road alongside the Niagara River.

The American forces were opposed by the Right Division of the British Army in Canada, under Major General Phineas Riall. Early on July 5, Riall sent a force of British infantry, Canadian militia and Indians across the Chippawa River to deal with Scott’s Brigade.

The Americans deployed into line and brought up Captain Nathaniel Towson’s artillery company with its three 12-pounder guns.  Riall, thinking that the American line was comprised of grey clad militia troops, expected it to fall back in disarray after the first few volleys.  As the American line continued to hold steady under British artillery fire, Riall realized his mistake and exclaimed “Those are regulars, by God!”

The British infantry advanced rapidly and became bunched and disordered.  Once the opposing lines had closed to less than 100 meters apart, Scott advanced his wings, forming his brigade into a “U” shape.  The well-drilled Americans poured a devastating crossfire into Riall’s advancing troops.  The Royal Scots and 100th Regiment of Foot broke and ran as Scott launched a bayonet charge.

Two days later, Brown’s Army crossed the Chippewa upstream of Riall’s defenses. However, the Niagara offensive ground to a halt when Brown failed to receive the expected naval support and supplies from Commodore Isaac Chauncey.  He withdrew southward but, fearing a possible raid on his supply base at Fort Schlosser, New York, he sent Scott’s Brigade back north to draw off the enemy.

Three miles into the march, Scott’s men spied Riall’s Army perched on the high ground above Lundy’s Lane, a spur from the main portage road along the Niagara River.  A formidable cluster of British cannons glistened in the twilight beside a little church at the top of the knoll. The rest of Riall’s line stretched down both sides of the hill forming a crescent, similar to that deployed by the Americans at Chippewa.  Scott’s men soon found themselves partially surrounded and they heard bugles, to the rear of the enemy, signaling the arrival of 800 British reinforcements.  Scott sent a dispatch to Brown.  “Brigadier General Scott will engage the British.  Send reinforcements.”

The initial volleys from the cannons on the knoll savaged Scott’s Brigade as it moved from the forest into an open field.  The American troops had nothing but muskets with which to respond.  Scott sent the 25th Infantry to flank the British left.  They were able to push the British and Canadian troops back and capture a seriously wounded General Riall but the British rallied.

When General Brown arrived on the field, he sent Eleazar Ripley’s Brigade forward to help Scott.  The brigade commanders soon concluded that they would have to take the British guns if they were to control the battle.  Colonel James Miller, one of Ripley’s regimental commanders, was asked to make a frontal assault, to which he modestly replied, “I’ll try, sir.”

Miller’s three hundred members of the 21st Infantry relieved Scott’s battered brigade and prepared for a direct attack up the south side of the hill. Darkness was falling but the British artillerymen rained grapeshot and canister upon the steadily advancing infantrymen.  When the Americans reached the moonlit hilltop, they advanced within twelve yards of the British cannons, dressed their line, and delivered a volley that swept away every member of the gun crews.  Then, with rifle butts and bayonets, they cleared the hill.

The British returned in an equally furious counterattack but were halted by the fury of American musketry.  The red-coated wave lapped the crest of the hill four times and receded before the fire of the stubborn 21st Infantry “Gimlets.” Baffled and beaten, the British withdrew, leaving their seven guns in the hands of Miller’s exhausted troops.  The hill was securely in American hands by 9:00 P.M on that evening of July 25, 1814.

Following the battle, Ripley wanted to hold the captured ground but General Brown ordered a withdrawal.  The Americans had run out of ammunition and water.  Scott’s and Ripley’s Brigades returned to Chippewa, Ontario.  The British forces were so exhausted they could not pursue.

Lundy’s Lane produced the highest casualty figures of any encounter during the War of 1812.  The 3000 British troops suffered a 21 % casualty rate and the 2100 Americans  fared even worse, with 171 killed and 573 wounded, a rate of 35 percent.  Phineas Riall, Winfield Scott and Jacob Brown were all wounded.  Scott’s injuries were severe enough to end his participation in the war.  Nevertheless, the story of the 21st Infantry’s gallant charge sent a thrill through the country and did much to counteract the disrepute into which a series of disastrous defeats had plunged the U.S. Army.

When the  army was re-organized in May, 1815, the surviving members of the 21st Infantry were assigned to a “new” 5th U.S. Infantry Regiment.  Their colonel, James Miller, took command of the 5th and their battle honors, including the bloody fight at Lundy’s Lane and Colonel Miller’s modest affirmation, “I’ll try, sir,” became part of the 5th Infantry’s heritage.